Interview 8 - (continued from 'The Energy Field of the Human Being'

There is one more picture. The depiction is rather symbolic. 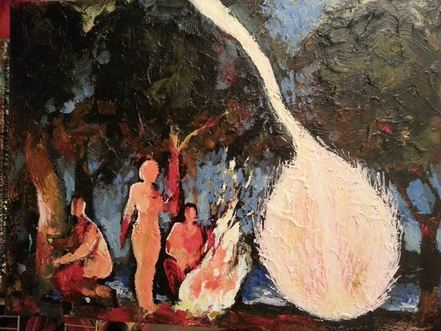 It was on a small stream that is called the Great Jordan River and there were many tourists over there. They burned campfires and glanced at the certain area where there was a bundle of fibers. They didn’t see it, but felt its presence and stared in its direction. They talked among themselves and simultaneously threw their sights on it, “what’s there? Oh, there is nothing there”. The structure was very bright with glowing fibers... looked like a cocoon. It truth it was a cocoon that dreamt itself there. They didn’t perceive it. I wouldn’t notice it either as I went to bed but one of the little boys camping with us decided to walk under the stars in the middle of the night. So we went for a walk and I saw this thing. Very strange…. Two pictures, one imposed upon another. Normal people having a BBQ … and maybe it was their relative or friend who wanted to be with them; and they almost perceived it but their syntax didn’t allow it to exist. So it was present only for me. I’m not sure if the boy saw it. He sees many things and tells me about them all the time. He says there is no difference between what’s real and what’s imagined by him. For example he can say: “I was in the black world and there was a little rope and I played with my black kitten. In reality he has a black cat. So it is hard to separate what he is perceiving and what he is imagining. I see how his Assemblage Point moves. His attention extends but what he turns into reality is not clear for me. Neither is it clear for him.


O World: "Will the boy be able to maintain his awareness into adulthood?"
Whether he keeps his awareness as an adult is not exactly the correct question as our awareness is with us as long as we live.


O World: "You lead awesome lives..."
We lead interesting lives indeed. That is the very disc that showed me how to reach the Dark Sea of Awareness and perceive it as petals and not dark water or anything else. He also taught us many things and due to him, our party is different from what is a norm for seers. We have an agreement that I will not reveal for now… But at this time he is just a little boy.

As far as I understand, the Assemblage Point may leave the body when a person is asleep. Not the Assemblage Point that is in the cocoon, but its copy in the energy body. The Assemblage Point in the physical and energy body are absolutely identical. And still they can function completely differently.  All this information about cocoons was compiled long ago.  Many years ago I aimed to explore what happens to a human when he or she falls asleep. I was very curious about it. In every possible opportunity, when I was in places where people were falling asleep: someone from my family or a co-worker, I tried to observe what is going on. The closest perception to our own world is when the Assemblage Point floats on the surface of the cocoon and hangs like a little knot or a little octopus. When the Assemblage Point leaves the cocoon it changes shape... it elongates while the human cocoon is lying below and sleeping. It creates a shape very similar to the shape of the Dome of the Nagual with ribbons. It is a very curious fact in my opinion.

Different situations create different effects. Sometimes, such a little knot, that changes the shape... If the attention is attracted to a seer (seers can do it) it is possible to direct the dreamer with the help of certain commands... willful acts. And the human wakes up with an impression that he was exactly at the place where the seer took his Assemblage Point to. The seer knows that only the Assemblage Point moved... the dreamer usually doesn’t differentiate whether it was him or if it was the Assemblage Point. For him or her, the attention is fully centered at that place.
That is not the only pattern of movement. Sometimes the human only sees dreams. In that case the Assemblage Point shifts very little and stays inside the cocoon. In this case, a human sees ‘everyday’ dreams. It can be frames (copies) of the everyday life… repetitions like: ”Oh, I was at work. I wake up and again go to work”. Sometimes, it happens several times – One wakes up, “oh I’m late for work”, and goes to work. Then wakes up again, “oh, I’m late for work” and goes to work again and then wakes up again and goes to work and so on… Then such a human wakes up very tired: “I’m late for work”, and finally rushes to work and thinks, “What a miserable life”. And here the Flyer appears.
And human things: “No, it’s better to hang myself than to lead such a life”.
When we are asleep we stop the process of thinking. One way or another, our Assemblage Point shifts and sometimes excited perception resists, “no, no, I don’t want this life” and they continue to control our superficial dreams. It happens with many people. But when we enter conscious dreaming for real the Flyer cannot get there. Precisely, thanks to this fact, humans can acquire these long fibers that the Flyer cannot consume. That is why it is recommended to practice dreaming in order to grow this inconsumable energy which you can always rely upon for the next step... even if you were eaten up somewhere.
But there is a problem – the Flyer is not the only predator. It’s just a first one who eats everything up before everyone else. It is the closest to the restaurant. In dreaming there are predators who try to use these big round delicious balls that one can always squeeze and feed on.

There is another type of energetic predator. I call them Sea Stars. 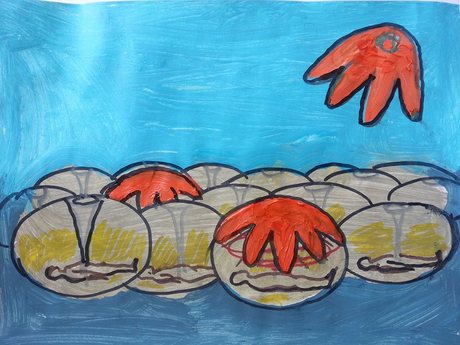 There is a condition in which all human beings fall asleep and they look like endless fields of bubbles, colourful and lazy bubbles like a watermelon field. 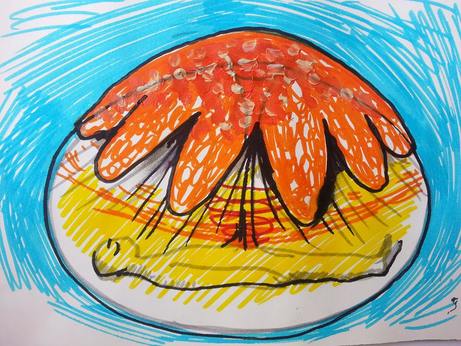 So imagine that you walk and you are hungry and thirsty and all around there is a field with watermelon... and it doesn’t belong to anyone. So what are you going to do? Continue walking? Or you’ll eat a watermelon or two. So, what do these orange-red things do? Their level of awareness is much higher than that of humans. We are in 3rd or 4th Density level and they are somewhere on the 6th level. So it flies over and superimposes itself upon the bubble. Here against the belly button. There is this cavity of the 2nd attention... the gap. The Sea Stars possess an analogous gap. When it superimposes itself on this gap it puts its gap to the human’s gap. After that it releases long fibers into your gap. They start rotating and stirring the energy inside. And you also have similar fibers. They are all over. But the vibrational level is different, more passive - lazy. We are more like water and it is more like fire. And our energy starts rising and enters into the Sea Star. But you are not aware of it. You are lazy. When this happens to a human being we have certain kinds of dreams: it may be sex, a violent computer game, running with shooting, thriller dreams. Very violent movies and sex movies. As a result you are out of energy as it was consumed. So during daytime you’re exhausting yourself at work, and at nighttime you are energetically raped.
Until you accumulate enough energy to deal with this situation you just have to refuse to play the game. You watch yourself constantly. It’s called ‘stalking’ oneself. You say, “Ok, that’s not for me. If I have sex, I know how it will end. I’ll stay powerless. I’ll wake up angry… or, it’s a war all over again, shooting again. No, it’s not for me. It’s not for real”. And when you say it to yourself, you know it’s not for real, you can stop this and you become inedible. Then they leave you alone because their goal is not to scare you or to make you sexual prey. It’s not sexual predation or rape. It’s just food.

And the next stage is to track how to leave the bubble. In general the person who spends their dreams inside the bubble, most often is an unaware human being, or he or she is a warrior who consciously maintains perception within the boundaries of the bubble. If you have enough energy and speed to leave the bubble, you can also see by yourself how these sea stars superimpose themselves on humans. But they really don’t like it. They’ll attack you. In this case you need to make yourself invisible, to pretend that you don’t exist. For example, many animals and insects do that. Say, when you approach some pod, it rolls into a ball and pretends that it doesn’t exist. Or a caterpillar… when you approach it and touch it, it turns into a stick. So we know well how to do it. So when such a strange creature notices you, you should pretend not to exist... but you should never move back to the bubble. It’s better to turn around and fly away then to lie back. And here we reach the next question – what happens when you pretend you don’t exist. You use what is called the inner silence. If you were a caterpillar you become a stick, “I’m not her”. It may be reached by shifting your eyes. It’s very similar to holding your breath. And they are losing you. It’s much easier to stop inner dialogue in the dreaming state. When one accumulates sufficient inner silence in dreaming, or the everyday world, it works everywhere. It works as well as much of it you have accumulated. The inner silence is indeed a substance. It is your power. Probably, when you accumulate enough inner silence you can stop such a creature only with your intent. Or scare it away. It will run away itself. The inner silence is a way to accumulate energy and use it. And it is your weapon.
spiritual, nagual, interviews, O World, social, religion, seer